Well it is time again to recap what came out of the cupboard and what went in this week.  I am afraid there has been more coming out than going in.

Thursday night was an experimental night with a new recipe.  Szechwan Chicken Stir fry over rice.  Some of the $.87 red pepper went into it.  It is hard to put a price on this as there was so much of a little of this and a little of that but I would guesstimate no more than $3.00 and it will reappear later. 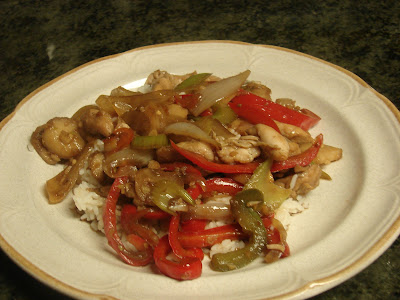 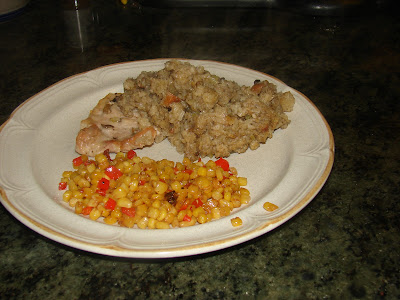 Stuffing Mix
Enough stale but not dry bread to make 18C of cubes
(about 18-20 slices of bread cut into 1/4" cubes)
6 T dried parsley
2 1/2 tsp poultry seasoning
2 tsp crumbled sage
2 tsp salt
1/2 tsp pepper
1tsp dried thyme
Place all but bread in food processor and process until power.  A spice grinder will do the same.
Mix seasoning and bread cubes to coat all the cubes evenly
Spread on a cookie sheet and allow to dry completely.
to make there are 2 ways with fresh celery and onions or with dried
If fresh
sweat 1/2 C chopped celery and 1/4 C chopped onion in 5T butter until translucent in a sauce pan
Add 1 1/2C chicken stock to pan, bring to a boil stir in 4 C of bread cubes, remove from heat, cover and let set 5minutes.  Fluff with a fork and serve.
If Dry
Add 1 1/2 C of chicken stock and 5T of butter to a sauce pan add 2T dried celery and 1T dried onion to pan, bring to a boil and let boil 2 minutes.  Add cubes as above.

Condensed cream of Mushroom Soup
4-5 slices of dried muchrooms
Pour 1 Cup of boiling water over mushrooms and allow to steep 1/2 hour
Remove mushrooms and chop
Place 1/3 of soup mix in a pan
Be sure you still have 1 C of mushroom stock.  If not add water to make 1 C
Slowly stir stock into soup mix and cook over medium heat until thick  Add chopped mushrooms
To Assemble
Brown pork chops, lay out in a baking pan, pour soup over pork chops then cover with stuffing mix. Cover with foil and bake at 350 degrees of 45 minutes or until pork shops are done.

Saturday night was Spaghetti( Homemade with tomatoes from the garden) with meat balls for 4.  Loaf of fresh made French Bread.  Cost $3.00.  This will be seen again.

Sunday Night yep that Szechsan Stir Fry showed up again for brother and French Bread.  Had to cook more rice $.35.  Also made 1 TV dinner for the freezer.  I sorta didn't eat.

Monday night Brother had a repeat on the Spaghetti and Meatballs and French Bread plus one TV dinner in the freezer of just Spaghetti and sauce.  No cost.  I skipped eating again. 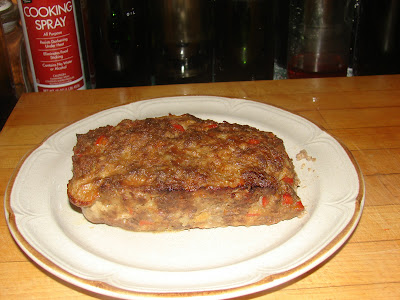 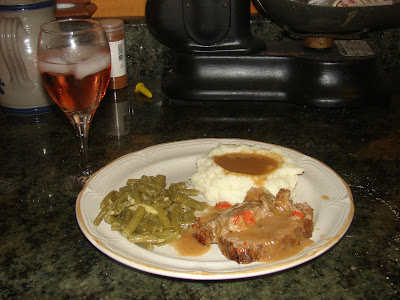 Just of laughs I have to share one of my loaves of bread from the weekend.  I normally make fresh bread to have for sandwiches of my brother over the weekend.  We never finish a loaf before it gets stale so I bought some smaller pans.  Well it sorta worked.  I put about 14 oz. of bread dough in one pan. 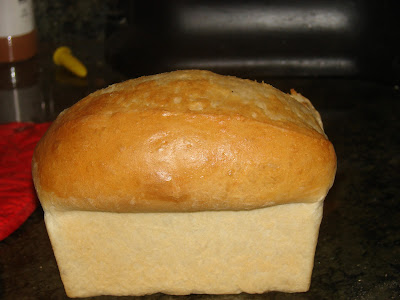 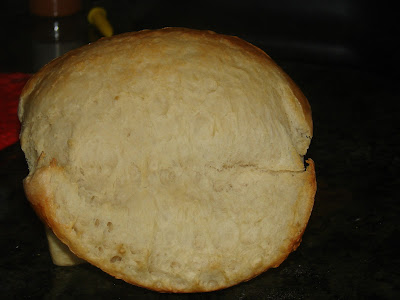 But here is the laugh.  The other side.  I had cut a slash length wise across the top of the bread.  It rose so much it actually peeled and separated one top side right off the bread.
Wednesday night is just me for dinner.  I made shrimp scampi over rice with basil/garlic butter I had stashed in the freezer and a lettuce wedge with creamy French Dressing that I made a week or so ago.

I was bad at the grocery store this week.  I actually bought a loaf of bread for the weekend but I will be away all day Saturday and the only think my brother is capable of getting himself for lunch is a sandwich and he can't cut fresh bread for himself and even if I did it early he might not figure it out.  I also put up 4 meals of chicken breasts, 2 meals for just me of liver and 4 meals of cube steak.  (a bit pricey but have to splurge once in a while)  Total groceries $37.00.  That did include $8 for 2 pounds of cheese with I have an addiction for.

Also made sugar free chocolate syrup for chocolate milk and sugar free cocoa mix but will post that this coming week in a separate post.

Don't forget to drop by  The Gardener of Eden and see what others are putting up, what they are using from their summer stash and maybe share some recipes.
Posted by wilderness at 9:36 AM

Email ThisBlogThis!Share to TwitterShare to FacebookShare to Pinterest
Labels: make your own groceries, recipes, Thursday's cupboard

Make your own packaged food Recipes

How Frugal are you?